How Does Fire Extinguishers Stop A Fire In Houston 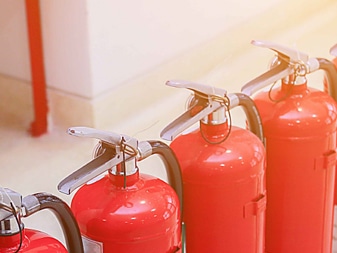 Let’s discuss fire extinguishers and fires. There are three things needed to make a fire. One is fuel like gasoline or wood, and you need heat and oxygen.

Oxygen and fuel are what creates fire, which means if you want to put a fire out, then you’ll want to get rid of heat, fuel, or oxygen. When the fire is controlled, then fuel is pretty easy to remove. For instance, you can stop fuel from flowing by shutting off the gas valve on a propane grill.

When a fire starts, it keeps burning because it creates heat. This is why you can put a fire out by throwing water on it. Throwing water on fire also prevents oxygen from reaching fuel. It also turns the fire into steam.

When you use a fire extinguisher, fuel is separated from oxygen. Oxygen is the same type of oxygen that people breathe. Furthermore, a fire will go out if you can coat the fuel with something that can keep oxygen away.

Cool gas can put a fire out. If you don’t have water nearby, then cool gas should do the trick. Carbon dioxide is a good option because it doesn’t burn and it’s very easy to spread.

Carbon dioxide doesn’t smell, and it is colorless. Both people and animals exhale carbon dioxide after they inhale oxygen from the air.

This is what actually happens to wood when it ends up burning. The fire expels carbon dioxide, while it uses oxygen to help it spread and burn. If carbon dioxide is kind of burned, then it won’t burn if it is tossed onto the fire.

Carbon dioxide is easy to distribute and it’s easy to store. It typically contained in a steel canister. When you open the nozzle, the gas streams out.

There are many advantages that carbon dioxide offers. One is that it is effective. It also comes out extremely cold, at temperatures of at least -100 degrees Fahrenheit.

When carbon dioxide is used on a fire, it simply floats away. This means you don’t have anything to clean up. Not only that, but water will end up flowing on the floor. In short, carbon dioxide removes two of the three things that create fires.

However, although there are many advantages of carbon dioxide, there are a handful of disadvantages. The biggest disadvantage is that it can be very dangerous if used in enclosed spaces. This is because it can cause suffocation.

Carbon dioxide suffocates a fire by robbing it of oxygen. It can also do the same exact thing to a person. If you use carbon dioxide, then it is important to not use it in an enclosed space.

Contact us or call us now, and we can help you install or inspect fire extinguishers or provide other types of fire safety assistance. Visit our blog for more related articles.

All About Fire Extinguishers In Houston

The Difference Between Fire Prevention, Protection & Suppression In Houston Pt 2